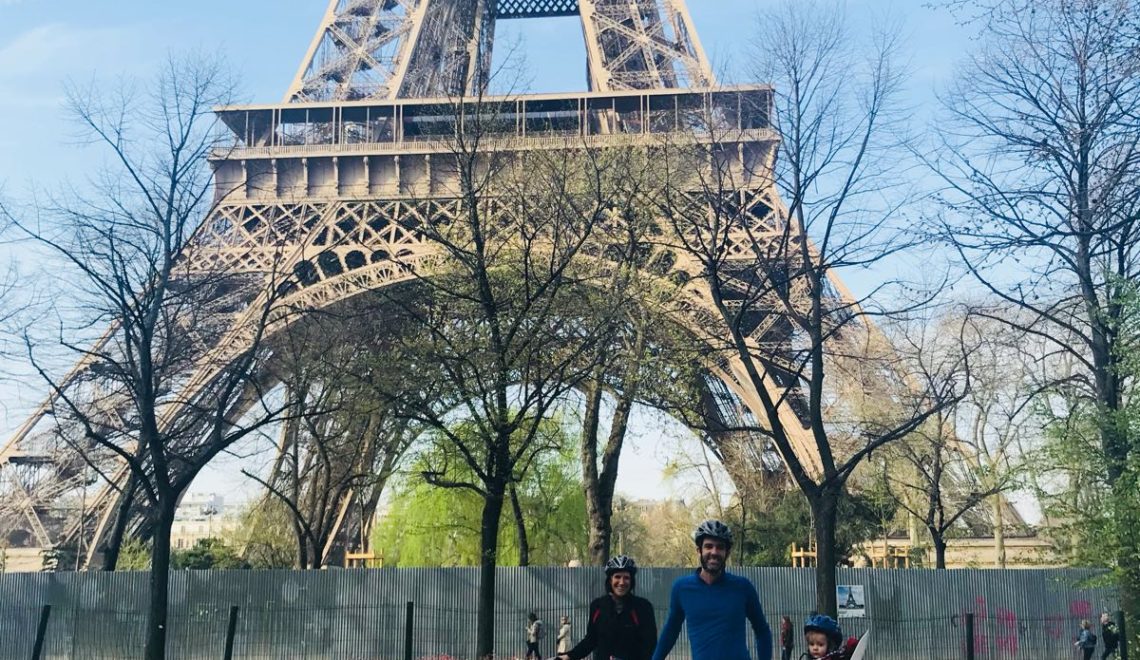 A busy day yesterday meant we didn’t have the chance to do an update, but thought we would quickly do a report on the first two days before we forget!

Despite Rob’s reluctance, I managed to persuade him that it was a great idea to take a 10 mile detour at the start of day 1 to get a photo at the Eiffel Tower! We thought this would take us around an hour but unbeknownst to us, it was actually the morning of the Paris marathon…. Ooops! This meant we got stuck between two roads full of runners and it took almost 4 hours to navigate our way in and back out of the city. Not a great start!

Luckily the sun was out, we found a boulangerie and our spirits were high. We left the city following the canal l’Ourcq cycle path – bustling with locals enjoying the weather. Obviously tow paths are flat right?! Well this one wasn’t! And with the 21 degree heat, it wasn’t an easy morning of cycling for us but Sam had a great time spotting the boats.

By the time we had reached our designated lunch spot it was past 2pm and we were exhausted and running on empty. I thought I might cry when the only hotel in the deserted town of Gressy had stopped serving food. (Top tip – never go to/stop in Gressy!) Long story short, Rob took an emergency taxi to a nearby retail park to source McDonalds which we ate on a patch of grass at the side of the road – glamorous!

The road north of Gressy saw us pass through a number of small villages towards Dammartin-en-Goële. A very pretty ride but incredibly hilly and we struggled a tad, with the panniers and toddler weighing us down. Spirits were quite low already and then we got a notification from AirBnB saying our host for the evening had cancelled (cheers Sonia!).

We pressed on heroically (!) to Dammartin but the only hotel in the town was closed when we turned up. Cue a panicked Google to find out that the only accommodation within ten miles was a fancy Chateau in the middle of a national park! Luckily turning up late and cycling with a toddler got us a pretty decent deal and a downhill run all the way there left us on a high for day one!

We had planned to set off at 730, but Sam had other ideas. Despite us making as much noise as humanly possible and opening all the windows, he was out for the count until nearly 9am.

When we finally set off, we were disappointed to hit hills almost immediately but the national park, Foret Domaniale d’Ermenonville, was beautiful and we had a lot of fun with Sam trying to spot elusive deer!

We stocked up with provisions in Senlis just as the rain started. Another top tip – if you ever need directions, a toilet, or any general help, florists are always the nicest people in any town!

The next two hours can just be described as rain and hills. So we were a bit frustrated that our lunch stop in the town of Nery involved no cafes, restaurants or bars whatsoever. Instead, we had a picnic lunch under a porch in the park of the local town hall. Pretty cold, but Sam had a brilliant time in the playground!

After lunch things got significantly better despite the rain because we hit a big downhill stretch. As Sam likes to say, ‘Weeeeeeeee!!!!!!’. Once we hit the river Oise, the cycling was pretty easy and we motored along to end the day in the town of Thourotte. After our Chateau last night, our roadside motel was slightly disappointing and apparently all restaurants here are closed on a Monday so we ended up at the local takeaway shop! Sam didn’t seem to mind.

So far, we’re all having a great time and have been blown away by how easy Sam has been on the bike, singing the theme from ‘Paw Patrol’ to himself most of the time! Hoping for some better weather tomorrow!