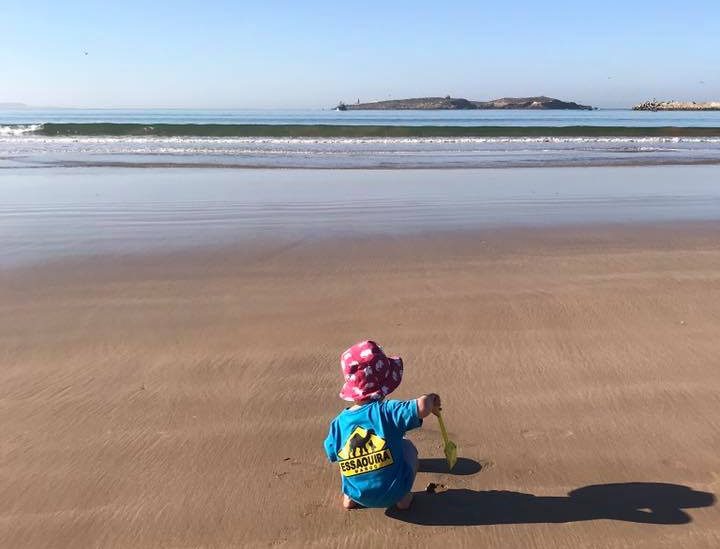 I was desperate for an overseas adventure to escape the cold, dreary Hertfordshire winter, whilst Rob was reminding me that Christmas is expensive and we couldn’t really afford it – story of our lives! However, luckily, Kayak and Easyjet are my friends and, by chance, through very random searching, I happened upon flights to Essaouira in Morocco for £30! How could Rob object now?!

It turns out that happening upon these flights was pretty lucky since Easyjet only fly to the tiny airport of Essaouira twice per week and only from London Luton airport (10 minutes from our house – woop! It was meant to be!)

We had some slight apprehensions before going. We remembered the crazy hustle and bustle, touts and crowds of Marrakesh which wouldn’t be delightful with a two year old, and hoped that we wouldn’t find the same levels of hassle and stress in Essaouira.  We had also read that Essaouira was nicknamed the ‘windy city’ and that the sand on the beach would blow horizontally into our faces all day every day. But we wanted a sunny adventure enough to give it a go – and off we went!

The airport is tiny which makes customs, baggage pick up and getting out incredibly fast and easy. We were met by a driver from the Riad we had reserved as we exited the airport and off we went on our 20 minute journey to the town down dry, dusty, narrow roads surrounded by scrubland but interspersed with little trading posts along the way.

As soon as we arrived, we knew we’d made a great choice – a clean, wide sandy beach that seemed to go on for miles, the ramparts of the old city wall rising up from behind the traditional fishing harbour, and the smells of fish mixing with whiffs of spices all made it feel immediately exciting, magical and “travelly.”

The whole old town of Essaouira is pedestrianised which immediately makes it fantastic for a toddler, but we were a bit concerned about how we were going to get our two suitcases, buggy, travel cot, baby change bag etc etc (we haven’t quite learnt how to travel light yet!) from the taxi rank across the main square, and down the various maze like alleyways through the old town to our riad. Luckily, there were dozens of men with huge wheelbarrows hanging around waiting to carry our bags for a small fee and we quickly loaded a wheelbarrow and hurried off behind the speedy porter through the wonderful zigzagging alleyways of the old medina. 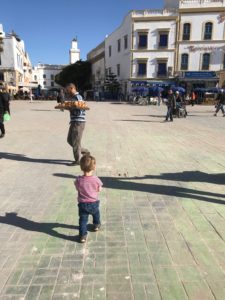 For our stay, we had booked Riad Baladin after finding it on a list of family friendly accommodation online. We were so excited to stay in a traditional riad with Sam (our toddler) and had tried to avoid typical hotels for this reason. Riad Baladin is in the absolute heart of the medina – an absolutely fantastic location hidden away down a secluded alleyway. The manager who greeted us was lovely and we were delighted to walk into a traditional courtyard full of mosaic tiles, hanging plants, ornate lights, sofas, a fireplace and even a jacuzzi. We were also assured that a cot would be available for us in our room as the manager led us up the spiral staircase to the second floor. And this is where our doubts started to creep in – like many traditional riads, the building has a huge atrium from floor to ceiling with each floor consisting of rooms around the perimeter leading on to an indoor balcony, from which you can look down to the ground floor many metres below. Fine right? Right, except the gaps between the bars on the balcony were HUGE! Definitely wide enough for a four year old to fit through, nevermind a toddler. At this point, my heart was in my chest – but we pushed on to see our room. The room was fine. No windows so a bit dingy but beautifully decorated with a huge ensuite bathroom with stone bath. Unfortunately, the bathroom also had an unlocked door that led on to the balcony and the bedroom itself had a lock which was incredibly easy to turn. Within one minute of arriving, our toddler had cracked it and was on the balcony with the huge drop about 50cm away from him. Well, I basically completely panicked and announced that we couldn’t possibly stay there! Luckily for us, the manager was incredibly kind and understanding and said something along the lines of ‘we don’t want a dead toddler on our hands either.’ He waited patiently whilst we desperately rang around for an alternative and promised us a full refund.

Thankfully, luck was on our side and a quick google and phone call led us to Jack’s apartments – the manager had only one apartment left but, since we were making a last minute booking, he offered to charge us 20 Euros less per night – bargain! Jack’s apartments have an office in the main square, Place Moulay Hassan, where we checked in and then were led to the actual apartment. We were immediately delighted. The apartments are right in the centre of the town, next to the old town wall, virtually on the ramparts overlooking the sea. They are housed in a traditional, old building which feels just like a riad but are modern, fresh, bright and, most of all, safe. Ours was the smallest of all of those available but it had two bedrooms, a lounge and a kitchen – along with an incredible view from the patio doors which had very narrow bars protecting Sam from falling to the street below – phew! To be honest, we spent most of the few days we were there patting ourselves on the back for finding these apartments and I’d highly recommend them to anyone thinking of making the trip. 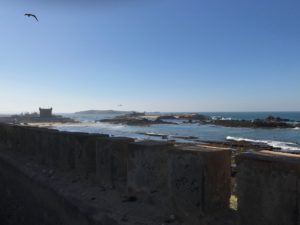 View from our room at Jack’s Apartments.

Essaouira is enchanting, laid back and colourful – with a gorgeous blue and white medina surrounded by medieval ramparts, fortified walls and huge stone gates. It seems in some ways like a Mediterranean town in Portugal but, at the same time, has the narrow bustling alleyways, souks, and culture that make it feel immediately Moroccan. And, even better, for Game of Thrones fans, this is where Danaerys meets the Unsullied for the first time – and our apartment basically overlooked the place where that scene was filmed!

It is very hard to over-exaggerate quite how magical, atmospheric, friendly, safe and picture perfect Essaouira is – and we took plenty of ‘postcard worthy’ shots along the way in an attempt to capture its wonder. I’m not sure how touristy the town is during the height of summer but, during our time there in December, it felt like it had really managed to avoid becoming a tourist overrun beach town. The souks and alleyways were bustling but with locals going about their business, playing chess on overturned buckets, sipping mint tea in shop doorways and haggling over the price of their groceries in the markets. And, unlike the bigger cities in Morocco, we were able to wander around and explore the tiny alleyways, nooks and crannies and various stalls and shops completely and utterly unhassled and just soak it all up. Most of the time, we didn’t even take the buggy, and Sam just wandered freely without worries about traffic or crowds. It felt incredibly free and relaxing yet exciting, vibrant and full of intrigue. We also loved the bohemian, artistic vibe of the town – a town where Jimi Hendrix apparently lived at some point in the 60s and wrote ‘Castles Made of Sand’, inspired by the ruins of the Borj El-Berod fortress on a sandy beach by the water’s edge. We visited small arts and crafts shops and listened to buskers in the streets and musicians in the unique, bohemian cafes – and it really felt like this is where we’d come if we wanted to write a novel, start a yoga retreat, or join a band!

As you leave the town and cross Place Moulay Hassan, a vast square full of cafes and buskers, you reach the crowded, bustling fishing harbour – quite the attack on the senses with the waft of raw fish blowing in the famous Essaouira wind, seagulls swooping, sardine fishermen crowded around selling their daily catch, and others preparing their brightly painted boats with baskets and nets ready to head out into the Atlantic Ocean, whose rough waves crash against the harbour walls and on to the beach below. The rampart walls here are covered in graffiti, people and seagulls – which doesn’t make them sound too appealing but actually just adds to the vibrant atmosphere of the working harbour.

Wow, the beach – where to even start? The beach is incredible. It is right outside the city walls, about a 10 minute walk from our apartment, and is wide, sandy and, during December, basically deserted except for groups of teenagers playing football. The rolling waves add to the scene and are perfect for paddling in as you walk for hours along the sand, hardly seeing a soul. As you get to the far end of the beach, not only do you happen upon some very cool, hippy, Thailand-esque beach bars but you also reach rolling sand dunes interspersed with camels and horses, some of which are aimed at tourists but some of which just seem to be owned and used by the locals. This part of the beach is incredibly atmospheric and feels almost like desert – we highly recommend taking the walk – and , despite all the warnings, we totally avoided the sand blowing wind that we’d heard so much about.

Places to eat and drink

One of the first things to remember if you’re planning to go to Essaouira is to bring your Munchkin seat! We forgot ours and ended up frequenting the two places with highchairs more than we would have chosen to otherwise! Essaouira, whilst incredibly safe and child friendly in many ways, has no baby change facilities or high chairs whatsoever – except for in two random restaurants which clearly get a lot of business due to having them.

Places which we recommend include:

In the old town: 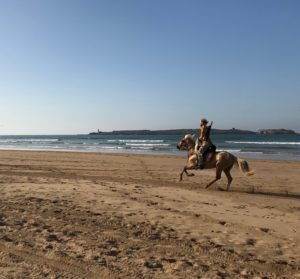 Overall, we highly highly recommend Essaouira as a place for a few days or longer. It’s so easy to get around, has an amazing beach, a beautiful medieval old town, a bustling harbour, fabulous souks – and can really only be described as magical!