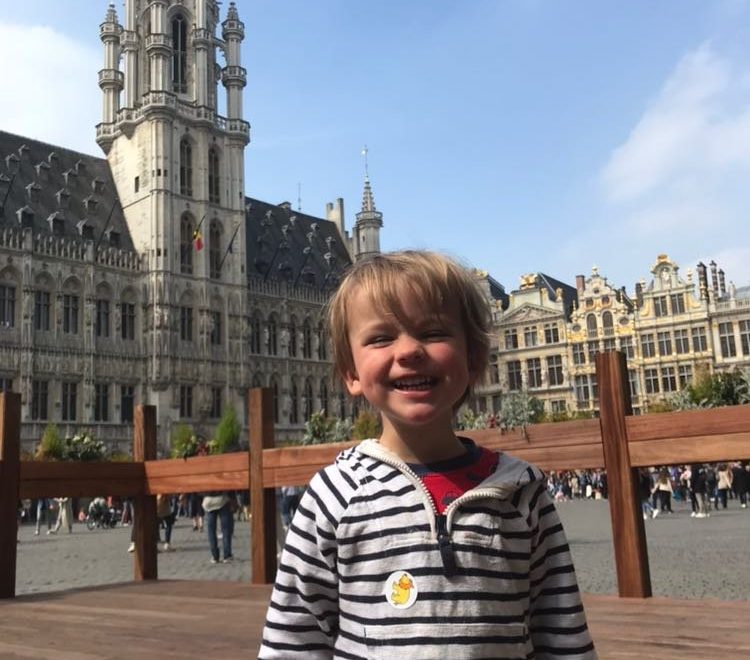 We’ve had a brilliant two days, mainly because of the glorious weather but also because Belgian cycle paths have been far superior to those we encountered in France (and flatter!) and cafes/restaurants/shops have actually been open!

Our original route plan involved skirting around the edge of Brussels to avoid the traffic. But, since it was a weekend and it was sunny, we decided to completely change our mind and go right through the centre to see the sights. A great decision! The cycle along the canal into the centre of the city was glorious and, within 5 minutes of arriving, we’d made our way to the Grand Place and settled into a cafe to watch the world go by and have a cheeky beer! Sam had a great time running around the pedestrianised square, although he moves too fast for our liking these days!

We didn’t leave the Grand Place until almost 2pm, by which time we’d only covered 10 miles of the planned 40, and we hadn’t really worked out how to get out of the city so we were a little worried. There was no need for concern though as we soon found ourselves on a bike path by a canal going past the Port of Brussels – not the best path but Sam was delighted by all the boats, planes and diggers along the way!

From there, we linked up with a lovely path along La Senne river – full of local people enjoying cycling and running in the sun – a great atmosphere though made our stealth bush wees a bit more difficult!

After a quick playground stop, we had a sunny evening cycle into the fab town of Lier where we enjoyed pasta in one of the outdoor cafes on the cobbled streets. Highly recommend a visit to Lier if you ever get the chance!

Another sunny day! We set off around 10.30am and had a slow, meandering start taking photos of the gorgeous rural scenery, spotting farm animals with Sam, and generally enjoying the holiday vibe! After only 10 miles, we spotted a gorgeous pub type place with a garden and playground and couldn’t resist stopping even though we knew we might regret it later! An early lunch in the sunshine and a delighted and exhausted Sam made a potentially more difficult afternoon fully worth it!

In the end, the afternoon was pretty great too – we were following the LF5 and LF9 cycle routes, which basically involve plotting your route by numbers and then following the corresponding number signs as you go along – very easy but meant we had no idea where we were most of the time, except for that it was beautiful! Flat cycle paths took us along rivers, through forests and over fields and we had such a relaxing time knowing that we couldn’t really get lost and wouldn’t hit any hills!

About 5 miles from the end of the day, we crossed into the Netherlands! But, yet again, no bloody signpost for a photo 🙄! There was no noticeable change as we crossed the border – it’s all in the region of Antwerp anyway and nobody had been speaking French in Belgium since before Halle (Flemish instead, which is much more like Dutch).

The final miles into the city of Breda went smoothly and we were checked in and exploring by 8pm! Breda is another place definitely worth a visit – cobbled town square, pretty cathedral and gorgeous outdoor cafes dotted around – pretty picture perfect actually!

Only two more days to go now all being well! Don’t really want it to end!