Cycle Touring With A Toddler: Logistics 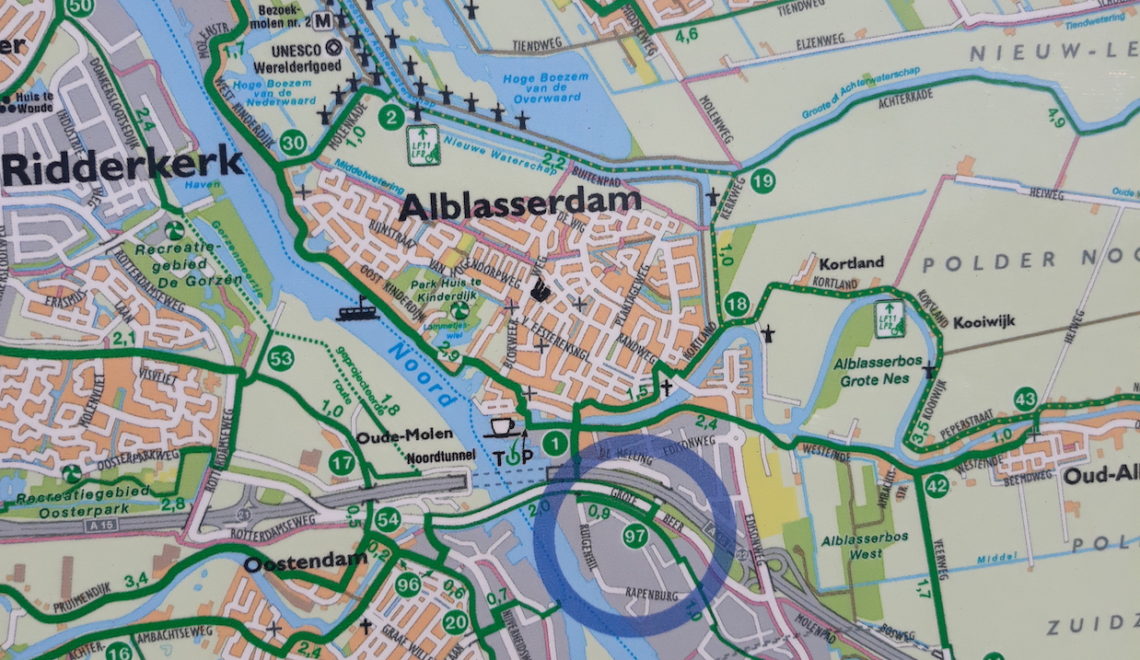 This is the second post on ‘how we did it’, describing some of the more practical aspects behind our 400 mile cycle from Paris to Amsterdam with a toddler. This is a longer post with some of the boring details – but hopefully useful if you’re considering doing something similar. 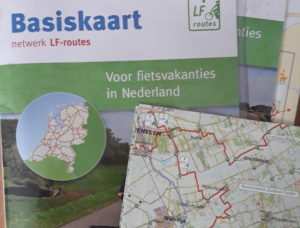 As mentioned before, the headline aim of going from Paris to Amsterdam was informed by little more than us thinking of European capital cities which weren’t too far away from each other – not necessarily an approach that we would endorse! However, once the challenge was set and we had committed to covering the distance, we needed to figure out the route. This is roughly the process we followed, with some recommendations on improvements:

We also violated a key rule of cycle touring planning – make your first day much shorter than other days. A last minute ‘revised’ schedule to include a visit to the Eiffel Tower meant day one was much longer than other days. This is the day when you’re getting used to the bikes again, working out your routine for stops and food, and making adjustments to the equipment. Do yourself a favour and set yourself up for success by planning an easy first day.

One thing we would do differently next time: Choose a route based on ease and enjoyment, not because it ‘sounds good’! 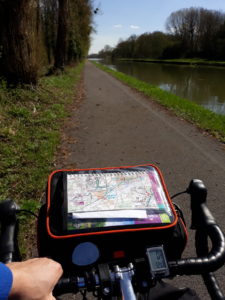 Initially we had visions of programming our entire journey into a GPS system and following this. During our preparation, it became clear that this wasn’t going to work for us because: i) we wanted to be able to make changes ‘on the fly’, ii) we didn’t want to rely on our phone batteries, and iii) maps were a much better option for showing us facilities that we might need (for example, the maps we used in the north of Belgium showed picnic benches). We did however use these paper maps in conjunction with Google Maps, which is particularly good for navigating through towns where a map might not be so clear. Google Maps also has a specific ‘cycle’ function which can be extremely useful, but has some major limitations. It’s brilliant for getting a quick read on distances, and also showing elevation (total climb and total descent). However, some of the cycle routes it suggests are complete nonsense, as we found one afternoon as we cycled into someone’s back garden…

One thing we would do differently next time: Buy large scale, up-to-date maps for all the ground we planned to cover. 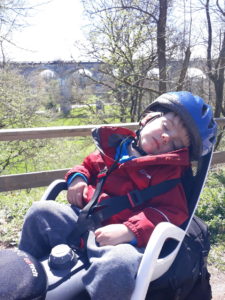 Both of us are reasonably fit, but by no means cycle nerds either. Physically, 40 miles per day was more than enough for us, but not enough to warrant a big training regime. However, practice runs with loaded bicycles were essential, especially seeing how Sam reacted to being in the chair for extended periods of time – including when we needed a nap. We didn’t get an opportunity to test our full setup before the actual trip, and this meant some frantic adjustment of panniers and bags on day one.

One thing we would do differently next time: Do a full one/two day trip with all the equipment. 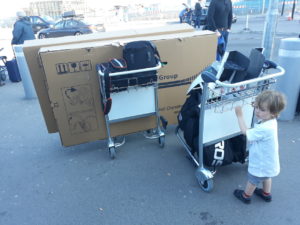 Our travel consisted of a train from London to Paris, and a flight from Amsterdam back to London. In order to get bikes booked on the Eurostar, we had to call the Euro Despatch desk to check the train has space for bikes. Once that is confirmed, then we booked our tickets, and called again to book the bikes on separately (£30 per bike). It sounds like a bit of a convoluted process, but worked very smoothly. Unfortunately the same couldn’t be said for the new route of Amsterdam to London. Eurostar were unable to book bikes on, and it was unclear whether we would be able to, so we booked a flight back with EasyJet. This was pretty straightforward – we found very cheap flights, and then booked bikes as ‘sporting baggage’. However, as the details below recount, if we were to do it again, we would definitely try to get a train each way…

We cycled from our house and took a 25 minute train into London St Pancras. Once there, the process was very smooth. This blog does a great job of describing the process. You have to remove all bags from the bikes, and we were initially asked to remove the child seat from the bike. However, when the man saw we couldn’t physically carry all the pannier bags and deal with a toddler, he very kindly let us put it back on! At the other end, the pickup point is well signposted and takes you along the platform to the edge of the station. There was initially some confusion as to which office we needed to pick the bikes up from, but there were lots of very friendly staff around to help us. Within an hour of arriving, we were on our bikes and out into the Parisian traffic. All in all a very smooth process.

The same could not be said for the return journey. Our travel woes started as a dragged our fully loaded bikes up the stairs at Amsterdam Central Station (you need to buy a separate ticket for your bike), onto a train bound for Schiphol Airport. Two minutes before the train was due to leave, an announcement informed us that there was an obstruction on the track near Schiphol, and all trains were cancelled. We quickly looked at the alternatives: cycling would take too long, taxis had already told us they wouldn’t take bikes. As we were debating our options, a train on another platform was announced and we raced onto it just before it pulled away.

We arrived at the airport but the clock was ticking – we needed to disassemble and pack away the bicycles. But before we could do that, we needed to locate where to buy the 20 Euro cardboard bike boxes we had been told would be available. We finally found the baggage area in the basement, with a long queue as people dropped off and picked up baggage. Jen and Sam stood in the queue, whilst I started dismantling bikes like a madman. There’s a good area with metal tables that give you space for this, and I got busy with the allen keys as a Chinese family stood and watched bemused as a sweated and cursed. Thirty minutes later and Jen dragged the huge flat-packed boxes around the corner. The boxes are 175cm x 100cm x 20cm and are so large that they perhaps didn’t require the bikes to be disassembled to the degree I had. With our flight about an hour away, we thought we had probably missed it, but we quickly tucked the 15 numbered flaps in the cardboard to form two bike boxes. I didn’t have the time I would have liked to properly pad the bikes, but wrapped what I could with some of our dirty clothes from the trip. With the bikes packed up, we slowly wheeled them on the trolley into the lift, and along to the check in desk.

“Don’t worry sir, you’re in safe hands now – please just relax”. The check-in staff had obviously picked up on my slightly stressed demeanour. We also hadn’t packed down our pannier bags as much as we would have liked to, so were a luggage item over our allowance. She very kindly let us check in the child cycle seat at no extra charge, and we ran to the departure gate to find…..our flight was delayed. We had in fact had plenty of time.

I’m not sure we would choose to fly with bikes and a toddler again, but if were were then the lessons would be…

One thing we would do differently next time: Get the train both ways – so much more relaxing than the flight! 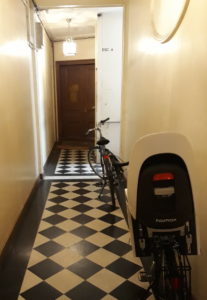 We stayed in mix of hotels and AirBnB accommodation. Here’s what we learnt: